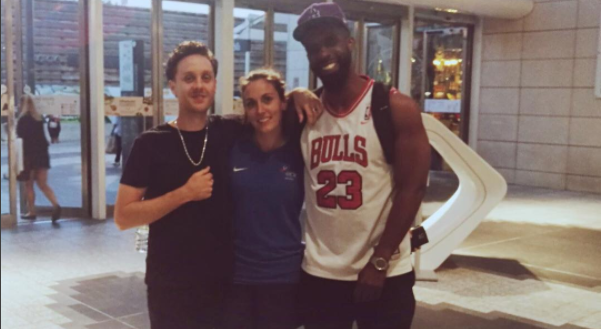 I’ve been asked repeatedly if I saw Corbyn or Adele when they visited Grenfell. And every time all I wanna talk about is these two: @billyarcaves and @b_mclaren
Two people, I hope I know for the rest of my life.

If you arrived at Grenfell Tower over the first 48 hours then you already recognise Becky. I arrived with a bag of clothes and saw this blur of blue. Blue eyes, blue outfit – organising people, trucks, parking, morale, media, EVERYTHING, just everything. Seeing the long queue of people around her asking her questions ranging from where toothpaste should be placed to where the 15-ton trucks should be parked, I automatically assumed she was a crisis manager. She was not. She had a personal connection to the tragedy, took no shit, saw a lack of leadership and just started organising.

Over 48 hours I watched thousands of people follow her ideas, instructions, high five and hug each other as she built human chains around city blocks that moved donations from one building to another. She got space all over London to send the donations to, whilst the local council were unavailable and just casually got free pizzas delivered to help volunteers and, yet, not one post, one video, one selfie was taken. She just got it done. Passion, conviction, water and half a cliff bar and she moved the world (yet, from the little time I spent getting to know her, I know she would deny any sense of credit).

Then there’s King Bill. By 8 pm on Wednesday, we were running out of boxes to pack things into. I call Jada Sezer who is already out on the ground helping. I ask her to share that we need boxes to her network. Twenty mins later my phone rings and a voice who instantly feels like family tells me he’s got all the boxes we can carry from Westfield. Again, I assume he’s super connected in London, done this many times and made a few phone calls. Wrong.

King Bill (this is my name for him, not his, as he is too humble and too chilled for that) saw Jada’s story, decided he was gonna help, made his way from Southend and just walked into shops and asked for boxes. Westfield shopping centre said yes. After we carted back our second crate of boxes back and I realised that he wasn’t an owner of a removals company but rather someone who simply decided it was time to help. I have to ask, “How did you convince Westfield to give you all their boxes?” He does the warm patient smile that people do when the answer is obvious to them but a mystery to you. “ I just asked, mate. If you don’t ask, the universe can’t answer”.

I didn’t see Adele. I didn’t see Corbyn. I saw strangers become family. I saw people helping each other. I saw religious ideologies and political standpoints put aside. I saw community. I saw tears and hugs. I saw frustration. I saw the absolute best of we can be.

I saw these two.

Insights from our Interview with Ruby Wax

Yes You Can
Scroll to top